Mission to and Among the Chinese

The Missionary Society of St. Columban was founded through the inspiration of the Reverend (later Bishop) Edward Galvin of Ireland (1882-1956). Galvin had considered serving as a missionary as a young man, but he was dissuaded by the concerns of his parents over such a life. He entered St Patrick's College (usually called Maynooth Seminary) near Dublin to study for the priesthood for his native Diocese of Cork, and was ordained in 1909. Due to an oversupply of clergy for that diocese, his bishop suggested that Galvin offer his service in the United States, until such time as there would be an opening in Cork. Galvin followed his advice and went to the Roman Catholic Diocese of Brooklyn in New York City, where he was assigned to Holy Rosary Parish. 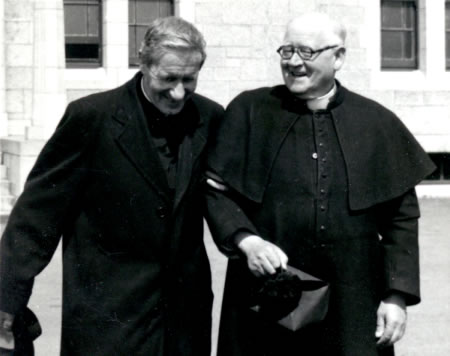 While serving there, Galvin came to know John M. Fraser, a Canadian priest, who stayed there while en route back to China. Galvin shared with Fraser his interest serving in China. Galvin told Fraser that he had read everything he could about that nation in the Brooklyn Public Library and asked to accompany Fraser back to China. Fraser discouraged Galvin's interest but finally told him that he would need the authorization of his bishop for this action. Galvin wrote and received this permission. Galvin departed for China on February 25, 1912.

Galvin and Fraser set sail for China on the RMS Empress of India (1891). He then began to serve in Zhejiang, where he spent the next four years. During that time, Galvin was appalled at the poverty and began to request help and assistance from his connections back in Ireland. He was even more appalled by what he called their ‘spiritual poverty’. Here were millions of friendly and industrious people who, because of the lack of missionaries, knew nothing of Jesus Christ.

He was joined in 1916 by two other priests, Frs. Patrick O’Reilly and Joseph O’Leary. The three soon realized that some kind of organized effort would be needed to adequately deal with the situation. His new colleagues urged Galvin to return to Ireland to establish a new missionary Society.

In June 1916, Galvin traveled through to the United States on his way back to Ireland. He met with bishops and priests everywhere he went, presenting his proposal. He found general support and encouragement. He arrived in Ireland that August, where he proceeded to his alma mater, Maynooth, and began to recruit among the seminarians there for his proposed society. A local Curate, Thomas Roynane, introduced Galvin to one of the seminary faculty, John Blowick, who agreed to join the endeavor and was to prove an important contributor to the development of the Society. Within two months of his arrival, Galvin had recruited five more priests, bringing the new Maynooth Mission to China to a total of eight members.

Galvin then presented his proposal to the Holy See, which gave its blessing. Galvin and Blowick spent 1917 laying the foundations for the society. Formal approval for the group, now named the Society of St. Columban, was given by Rome on June 29, 1918, and a new seminary was immediately founded in Ireland to train new members for the missions. In the United States, a house soon was opened near Omaha, Neb., where another seminary was opened within a few years. The Society grew to number 40 priests and 60 seminarians by 1920. Galvin then led the first band of the Society to open their mission in the Hanyang District (modern day Wuhan, China). Galvin was named Apostolic Prefect of the Apostolic Prefecture of Hanyang by the Holy See in 1923 and later made the Apostolic Vicar of the promoted Apostolic Vicariate of Hanyang in 1927, with Galvin being consecrated as its titular bishop (it became a diocese under him in 1946, suffragan of Hankou).

Working Among the Chinese 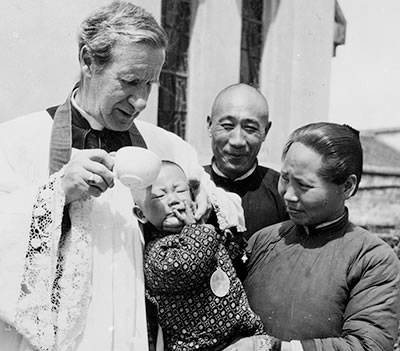 As they began their work, the missionaries encountered various calamities to which the region was subject, ranging from famines to flooding. They also soon found themselves in the middle of a civil war between the forces of the Guominjun Nationalist Army and the Chinese Communist Party, which lasted for the next three decades. This social instability allowed warlords to flourish and mission stations were routinely threatened by bandits. Supplies were often stolen en route and mission workers were frequently kidnapped. On July 15, 1929, Communist Army bandits captured Columban Fr Timothy Leonard. After a few days as a prisoner, they murdered him. Others, though, were taken captive and released, but one, Father Cornelius Tierney, died after three months of harsh captivity. In the fall of 1932, Chiang Kai-shek’s nationalist republican troops began attacking the Communists with a vigor never seen before. The Communists fell back on all fronts, and, once more, people could move about with relative safety.

“The reign of terror,” wrote one Columban, “far from weakening the appeal of the Catholic Church in this area, seems to have strengthened it.” It was an extraordinary time as thousands expressed a sincere desire to enter the Church.

In 1933, the Holy See designated a new territory for the Columbans and Fr Patrick Cleary was appointed in charge of the Apostolic Vicariate of Nancheng (in Nancheng County, south of Hanyang). The Japanese invasion of China in 1937 saw the Society challenged to care for both civilians and soldiers, as major outbreaks of Cholera swept the populace. This was soon followed by the outbreak of World War II, when members of the Society faced house arrest. In 1946, the Holy See entrusted a new mission, known as Huchow, to the Columban Fathers.

Three years later, the Communists took over this area, and, before long, they were in control of all of China. Several Columbans were thrown into jail and eventually all the Columban priests and Sisters were expelled. Bishops Galvin and Cleary were expelled in 1952.

By 1954, every one of the 146 Columbans serving in China was “expelled forever.” On September 19, 1952, a weary, haggard Bishop Galvin stumbled across the Communist China border into Hong Kong. Forty years of heroic missionary service had ended. Bishop Galvin was even branded a “criminal.” Three-and-a-half years later, death came quietly for this great Catholic missionary. 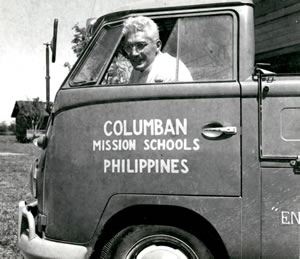 The Society was active for many years in Australia, mainly in support of the mission to China.

When mainland China was closed to missionaries in the 1950s, the Society responded to the urgent call from Latin America and Columbans went to new urban settlements in Peru and Chile. The Society also responded to the missionary needs of the Church in Fiji (1952).